With both equities and bond allocations selling off over the last six months, investors are understandably worried about the seemingly never-ending uncertainty and volatility within markets. Whether it is geopolitics, inflation, energy issues or rising interest rates, the markets seem inundated with negativity.

Markets over the last month had been feeling somewhat relieved as inflation in the US had calmed somewhat and interest rates moderated. What changed the was a reacceleration in the United States (US) inflation rate that occurred last week on Friday (10th June 22). A monthly increase of 1% versus an expected 0.7% shifted inflation and interest rate expectations upwards heavily. This resulted in a significant selloff in both stocks and bonds as they tend to be somewhat correlated (tend trade in the same direction) when interest rates are increasing. This spooked markets and was responsible for the volatility seen earlier in the week.

An increase in the most recent headline CPI (Consumer Price Index) numbers is highlighted on the below chart (dark line). What is important to understand is that headline inflation includes price increases in both energy and food as well as the many other components such as housing, apparel, transportation, medical care, among many others. As highlighted by the green line, core inflation removes the impacts of energy and food prices to have a better understanding of the less volatile components of the CPI. Food and energy prices, whilst they still have to be paid by consumers, are determined more by the global economic picture than by the ‘actual’ inflation caused by heightened demand of goods and services within a particular country. 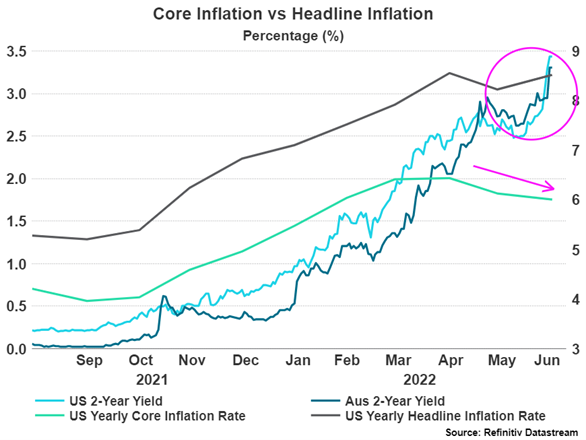 The increasing divergence between core and headline inflation is what we would call the silver lining in this messy economic picture. The core inflation rate has decreased for two consecutive months whilst headline inflation decreased last month and then increased with this last number off the back of rising energy prices.

What this means is that the prices of the majority of goods and services captured by this measure are starting to slow and bigger issues such as the war in Ukraine and supply issues stemming from Covid are responsible for the rising headline numbers. These will hopefully over time begin to subside substantially.

Whilst nothing in this market is a sure thing (as we all have by now noticed), a continuation of this trend of subsiding core inflation is a very positive thing. Markets have so far not paid too much attention to this number but will do so more in the coming months.

When thinking about your portfolio, the time to panic about what markets are doing is not now. Central banks are once again attempting to raise interest rates to more ‘normal’ levels. When this has been conducted in the past, markets have fallen just like they have now, albeit bond markets have not fallen this hard and fast for decades. What in our opinion, has to happen eventually, is what is described as a “pivot” from the central banks. This is a pivoting of talking about higher interest rates to the beginning of talking about a ceasing of interest rate rises and even a talk of dropping rates. We see this as an extremely likely possibility once inflation shows signs of slowing down (which we think it has just begun to). This still may take time to play out but is seen as an inevitability on a structural level.

Once this pivot takes place, both equity and bond markets have the potential to recover quickly and significantly in a short period of time. This is why a panicked sell down of a portfolio during this time is not recommended.

Once again, nothing is guaranteed in this market and inflation has the potential to keep rising. Over the medium to longer term however, high interest rates are unsustainable in the current economic environment for a myriad of reasons and signs of cooling of inflation will be extremely beneficial for the asset classes that have been so hurt to begin this year.

There appears to be some light at the end of the very dark tunnel.

The information provided in this communication has been issued by Centrepoint Alliance Ltd and Ventura Investment Management Limited (AFSL 253045).

The information provided is general advice only has not taken into account your financial circumstances, needs or objectives. This publication should be viewed as an additional resource, not as your sole source of information. Where you are considering the acquisition, or possible acquisition, of a particular financial product, you should obtain a Product Disclosure for the relevant product before you make any decision to invest. Past performance does not necessarily indicate a financial product’s future performance. It is imperative that you seek advice from a registered professional financial adviser before making any investment decisions.

Whilst all care has been taken in the preparation of this material, no warranty is given in respect of the information provided and accordingly neither Centrepoint Alliance Ltd nor its related entities, guarantee the data or content contained herein to be accurate, complete or timely nor will they have any liability for its use or distribution.