How the different asset classes have fared:
(As at December 2020) 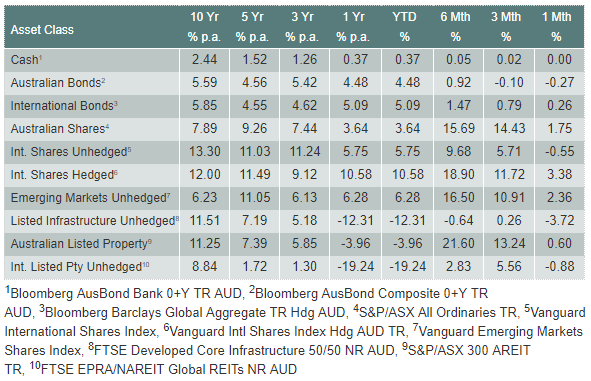 The ASX200 was on track for a stellar December prior to the outbreak, up 2.1% on 9 December 2020. The emergence of a new cluster of COVID-19 cases in Sydney’s northern beaches saw markets tempering expectations of a swift recovery. Despite this, the ASX All Ords returned 1.75% in December 2020. Markets were buoyed by strong commodity prices; iron ore rose 20.0% over the month and is up an astounding 152.9% since its April lows, driven by strong demand from China and supply disruptions in Brazil. The surge in commodity prices and overall weakness in the US dollar has seen the Australian dollar trade to $0.76, levels not seen since 2018.

Meanwhile, tensions between Australian and China continued to flare during December 2020, with China banning Australian coal exports and Australia taking up action with the World Trade Organisation. Given China’s high reliance on Australia’s iron ore export, the impact is expected to be limited. In addition, the incoming Biden administration is anticipated to resolve the US/China tension in a more diplomatic way, paving the way for Australia to resolve tensions with China too.

New global coronavirus cases continued to climb although at a slower pace. While the mortality rate in developed countries has dropped from 8.5% to around 2.0%, the number of deaths are approaching April highs and some hospitals are at or near capacity. Alarmingly, in the UK, a new strain of COVID-19 was discovered to be more infectious, but not necessarily more severe. This led to more than 40 countries suspending travel with the United Kingdom and a nationwide lockdown.  Thankfully, the vaccines are still expected to be effective on the new strain. Across the globe, vaccines were rolled out, however, supply and transport issues meant the rate of roll out was below expectations. The vaccine rollout is not expected to help with the current wave but should significantly help the recovery in the second half of 2021.

With the continued rise in global coronavirus cases, major governments around the world continued to reiterate their support for the economy with the ECB and the US committing to stimulus support. The ECB increased its pandemic emergency purchase program from €1.35tn to €1.85tn and extended the program to March 2022. The US also passed a nearly $900bn stimulus bill, while not as large as many had expected, the stimulus is big enough to hold off a recession.  Markets reacted positively to these announcements. Finally, after years of negotiation, the Brexit agreement was completed and signed between the UK and the European Union.

The information provided in this communication has been issued by Centrepoint Alliance Ltd and Ventura Investment Management Limited (AFSL 253045).

The information provided is general advice only has not taken into account your financial circumstances, needs or objectives. This publication should be viewed as an additional resource, not as your sole source of information. Where you are considering the acquisition, or possible acquisition, of a particular financial product, you should obtain a Product Disclosure for the relevant product before you make any decision to invest. Past performance does not necessarily indicate a financial product’s future performance. It is imperative that you seek advice from a registered professional financial adviser before making any investment decisions.

Whilst all care has been taken in the preparation of this material, no warranty is given in respect of the information provided and accordingly neither Centrepoint Alliance Ltd nor its related entities, guarantee the data or content contained herein to be accurate, complete or timely nor will they have any liability for its use or distribution.